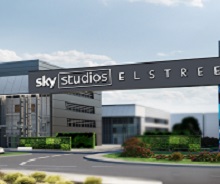 Subject to planning consent, the 32-acre development is expected to open in 2022 and will have the capacity to house several films and TV shows simultaneously, with each of the 14 sound stages covering more than 20,000 sq ft.

Once complete, the site will include production offices, a set-construction workshop, a screening cinema and state-of-the-art post-production and digital facilities.

The space will host feature films from Universal Pictures, Focus Features and Working Title as well as TV content from NBCUniversal Content Studios. The studio facility will also be available for third-party producers.

It is expected to lead to the creation of more than 2000 new jobs and help fuel the local economy, while generating an additional £3bn of production investment in the UK’s creative economy over the first five years of operation.

A formal planning application will be submitted early next year for the development, which will be located at Rowley Lane, a short walk from the main Elstree Studios. The two entities will be managed independently of each other.

Roger Morris, managing director, Elstree Studios, said: “Sky Studios Elstree will be of immense importance to the UK film and television industry – it will not only boost the local economy of Hertsmere and Hertfordshire, but will also have a major impact on the UK’s creative sector as a whole.

“We are extremely proud that Sky Studios Elstree has chosen to locate near us and we look forward to working closely with them.”

Studio space is at a premium in the UK, and there are several development plans in the pipeline, with construction projects underway on purpose-built facilities and conversion or expansion on existing buildings and sites.

The UK remains one of a handful of production hubs worldwide able to house multiple big-budget projects at any one time, but with Disney and Netflix now both having taken up residence at Pinewood and Shepperton respectively, producers are having to turn elsewhere to find space.