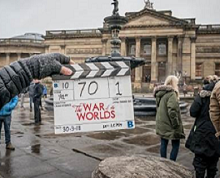 The three-part drama remains true to the original Edwardian England setting, and used locations including the inside and outside of St George’s Hall, Croxteth Hall, Sefton Park Palm House, Martins Bank Building on Water Street and Eldon Grove in Vauxhall.

Crucial scenes were also filmed at Ainsdale woods and Formby Beach – the woods becoming an ‘impact zone’ for the Martian arrival. An alien landscape was constructed in a disused warehouse in Wirral, which was turned into a studio.

Liverpool Film Office worked in partnership with Mammoth Screen to facilitate the shoot. The show’s director, Craig Viveiros, said: “Liverpool was great when it came to its architecture and the ability to close it off to dress it and shoot it.

“Locations like St George’s Hall, Formby Beach, Croxteth Hall allowed us to film there and are key scenes in the production."

Netflix drama The Crown also used Liverpool for three days’ filming. Doubling city centre areas near the Three Graces, on North John Street and on the waterfront, as Washington, DC.

According to stats from the film office, the region hosted more than 360 film and TV projects in 2018, with 1,387 filming days in total – activity that generated more than £16m for the local economy.