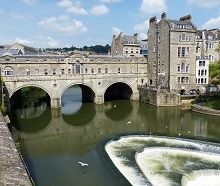 ITV detective drama Invisible has wrapped a 10-week shoot that used Bath and Bristol locations with a production base at The Bottle Yard Studios.

Councillor Paul Crossley, cabinet member for communities added: "Bath has a reputation for period filming due to its wealth of Georgian architecture but it's great to see the 'other side' of Bath being used for contemporary filming for Invisible.

“The filming will bring substantial economic benefits to the area and will further establish the region's film-friendly reputation."

Filming also took place at a number of Bristol locations, assisted by the Bristol Film Office, including Goldney Hall in Clifton, Wills Memorial Hall on Park Street, the Marriot Hotel on College Green and Queen's Square.

Sets were built at The Bottle Yard for the show’s central police station and interiors of a police incident trailer.

Damien Timmer, managing director of Mammoth Screen, said of the location shoot: "The location takes centre stage in the series, and has provided us with a wealth of varied sites - from impressive Grade II listed buildings, cathedrals and gardens; to hospitals, libraries and gyms - which were chosen to reflect the classic and historical city of Bath in a contemporary setting, in keeping with the overall approach of the drama."

Invisible is Mammoth Screen’s third production to use the Bottle Yard this year, following the Poldark finale and the BBC Agatha Christie drama The Pale Horse. It is produced by Amy Thurgood with Richard Senior and Laura Scrivano directing episodes one and two respectively.