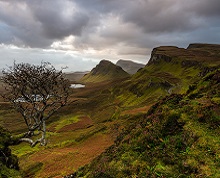 The film centres on a fund manager (Macdonald), who gives up her career and relationship to follow her dream of becoming an opera singer, a move which sees her under the tuition of a renowned singing teacher – in the Scottish Highlands.

Falling for Figaro is a UK/Australia co-production; filming takes place in Scotland with post in Australia. Screen Scotland and Screen Australia are backing the feature.

Ben Lewin directs from a screenplay he wrote with Allen Palmer; producers are Arabella Page Croft and Kieran Parker of Black Camel Pictures, alongside Philip Wade and Judi Levine.

The Duchess films for Netflix with Katherine Ryan

Writer/actor/producer Katherine Ryan has begun filming The Duchess for Netflix.