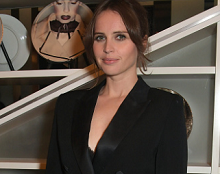 A new film based on Jojo Moyes’ novel The Last Letter From Your Lover has just begun a Spain/UK shoot.

The first week’s filming takes place in Mallorca with the remaining eight weeks’ shoot based in London.

Graham Broadbent and Pete Czernin produce for Blueprint Pictures in the UK alongside Simone Urdl and Jennifer Weiss for The Film Farm; the feature is backed by StudioCanal.

Moyes’ romantic drama centres on a young London journalist (Jones) who uncovers a bunch of love letters in the archives recounting an affair in the 1960s.

Cameras also begin rolling this week on the second series of Back, Big Talk’s comedy for Channel 4 starring David Mitchell and Robert Webb, and the third series of The Windsors, also for Channel 4, from Noho Film and Television.