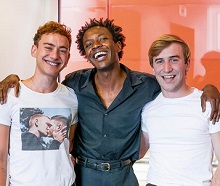 It charts the highs and lows of the lives of four friends during the 1980s, a decade in which everything changed with the advent of the AIDS epidemic.

Harris said of the project: “I’m so pleased, and incredibly proud, to be a part of Russell T Davies’ new series. This drama, Boys, is two things: it is an irresistible, funny, jubilant story of young people discovering their true identities and the unalloyed joy of living life to the fullest, it is also a deeply resonant exploration of a decade when so many of these lives were cut short by the devastating effects of the nascent AIDS pandemic.

“Russell’s scripts chart the highs and lows of this time so beautifully and deftly, it’s an honour to help tell this story.”