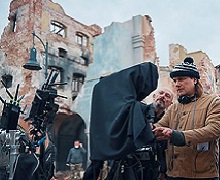 The story follows the lives of ordinary people from Britain, Poland, France and Germany during the first year of the Second World War as the conflict upends their world.

Bobby Cochrane, development manager at the city’s film office, Screen Manchester, worked closely with the Mammoth Screen production team to facilitate the location filming, with the production office and studio based at Space Studios Manchester.

Key streets were dressed to ensure the backdrop matched the period setting, and the film office worked with the highways department and Greater Manchester Police on the associated road closures and necessary permitting for the large lighting cherry pickers.

Cochrane said of the shoot: “It was a pleasure to welcome this major BBC One drama series to Manchester and we saw first-hand the fantastic street transformations that took place, taking the city back to 1939.

“It goes to show the capability that Manchester has in offering both period and modern day locations and with added incentives of world-class studios, crew and support businesses all based in the city, then it’s no surprise that high-end TV dramas like World on Fire chose Manchester as their base to produce content."