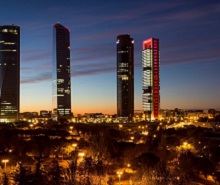 As yet untitled, the drama is for AMC and is filming in Madrid with UK HoDs on board, including executive producer Jolyon Symonds.

Each hour-long episode features a new story and fresh cast, and explores an imagined world around 15 years from now when science discovers a way for everyone to find their soul mate.

Will Bridges (Black Mirror; Stranger Things) and Brett Goldstein (Superbob; Adult Life Skills) have written the drama, based on their short film, For Life.

David Madden, president of programming for AMC Networks and AMC Studios, said of the commission when it was first announced: “This is AMC’s first foray into non-serialized story-telling, and we’re trying to do so in the boldest way possible.

“The show explores how technological innovation can impact the most delicate matters of the heart, and each episode will turn personal life choices into high-stakes drama.”