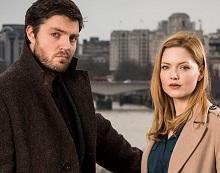 Filming is underway on the second series of Strike, starring Tom Burke and Holliday Grainger.

The mini-series will be delivered to BBC One as a run of 4 x 60 and is based on the novel Lethal White.

The drama comes from Bronte Film & TV, the company set up in 2013 to produce work by JK Rowling, who writes the Cormoran Strike books under the pseudonym Robert Galbraith.

The first Rowling work to be adapted for television was The Casual Vacancy, followed by three films in the Strike series that were broadcast in 2017/2018.

Snowed-In Productions, the branch of Bronte that produces non-Rowling works, is currently in development with writer Clara Salaman on a new ITV thriller, Too Close, starring Emily Watson.