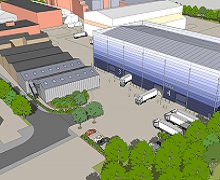 With studio space at a premium in the UK, Elstree has announced major expansion plans while Pinewood is set to be booked out by Disney in a long-term agreement.

The new development at Elstree Studios will be on the site formerly used by the Big Brother house.

The plan is to build two new stages similar to the established George Lucas stages, to become available in 2020.

Planning applications have been submitted to Hertsmere Borough Council.

Roger Morris, managing director of Elstree Studios, says, “The building of the new stages is to fulfil client demand at Elstree Studios. We already have a number of clients who have confirmed interest in hiring the stages once they are built.

“Elstree Studios is currently home to Strictly Come Dancing, The Crown and BBC Studioworks. The Studios have enjoyed great success in the last ten years and the freeing up of the Big Brother space has opened up great opportunity. The stages will be suitable for both film and high-end television use. We have plans to build more stages at the Elstree Studios site as space becomes available.”

Elstree Studios currently has a range of film and TV studios from 3,000sq ft to 16,000sq ft with the George Lucas stage being one of the tallest in Europe with a height of 50ft.

The news came around the same time as confirmation that Pinewood has entered into a long-term agreement with The Walt Disney Company Limited. The arrangement will see Disney take all the stages, backlots and other production accommodation at Pinewood Studios in Buckinghamshire.

Chairman of Pinewood Group Limited, Paul Golding, said: “It’s wonderful to have Disney here at Pinewood. They’ve been making great films with us for many years and the fact they want to shoot so many more here is testimony not only to the quality of the teams and infrastructure at Pinewood, but also to the British film industry as a whole.”