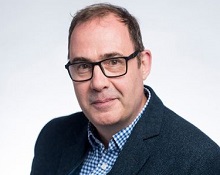 David Smith, managing director of Glasgow-based TV production company Matchlight, has been appointed as director of screen at Screen Scotland.

Smith (pictured right) said of his new role, which he will take up from early November: “The landscape for the film and TV industries - globally and locally - is rapidly changing.

"It’s critical that Scotland’s creative talent is supported to keep pace, to grow to meet demand and to find as wide an audience as possible for its already highly regarded output.

“Screen Scotland’s first year has been very positive, in many ways though this is just the start and I’m really looking forward to joining the fantastic team at Screen Scotland as it moves forward.”

The Scottish government has been under pressure for some time to provide a purpose-built film studio to support the burgeoning demand for world-class facilities in the nations and regions.

There are several developments in Scotland currently underway, with the expansion of Wardpark in Cumbernauld (home to Outlander) as well as the imminent opening of a new studio in Leith. There is also an ongoing discussion about the new location for a studio that was previoudsly due to be sited at Pentland.