The Nest films in Glasgow with Sophie Rundle 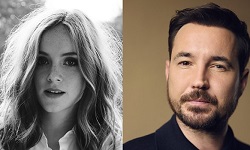 Sophie Rundle and Martin Compston are set to star in The Nest, a new drama that begins a four-month shoot in Glasgow next week.

Nicole Taylor (Wild Rose, Three Girls, The C Word) has written the emotional thriller from Studio Lambert that will be delivered to BBC One as a 5 x 60. Shooting is set to begin on 2 September.

The story centres on a wealthy couple and a teenage girl who make a pact that will change their lives forever. Mirren Mack, Shirley Henderson, Katie Leung and David Hayman are among the cast.

Compston said of the project: “I’m absolutely delighted to join the cast of The Nest. Nicole Taylor is one of the most exciting and original voices in writing today, I’m chuffed we’re finally working together.

"Combined with filming in Glasgow and going back onto BBC One in my native west coast accent makes it a dream scenario."

PI subscribers have had access to key production information on The Nest since last year, with subsequent updates on HoD hires. To request a free online demo of Production Intelligence, click here.