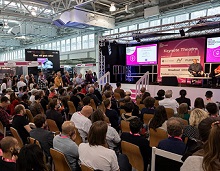 The UK’s fastest growing media exhibition, the Media Production and Technology Show (MPTS), has bought the assets of the Broadcast Video Expo (BVE), which will close with immediate effect.

BVE’s former owner, ITE Group, made the decision to close the show prior to MPTS snapping up the assets.

The acquisition of BVE was announced by MPTS’s parent company Media Business Insight (MBI, also the parent company and publisher of Broadcast and Screen International magazine).

The move means the Media Production and Technology show will be the UK’s biggest broadcast and media entertainment and technology show when it takes place at London Olympia on 13-14 May 2020.

ITE Group told exhibitors and visitors that its decision to close the show was the result of market feedback and backed MPTS to deliver a single event for the industry.

“We have been listening to feedback for some time now that the broadcast exhibitions industry is too crowded. ITE Group plc have therefore decided to cancel BVE from 2020 onwards and to sell the BVE intellectual property to Media Business Insight, the organiser of the Media Production & Technology Show.

“By selling BVE to MBI, we believe your industry and your business will benefit from having only one major show in London – the Media Production & Technology Show – which will enable the entire UK broadcast, production and post-production community to gather together every year.

The addition of the BVE community will allow the Media Production & Technology Show to continue to grow and lead the future direction of your industry in the UK.”

MPTS event director Charlotte Wheeler said the show would continue to build on a highly successful event this year, with big plans for 2020 to significantly extend and enhance its offering to more technology manufacturers, suppliers, content and new partners for the event.

She said: “Our visitor numbers were up 25% this year and we had a record rebook level with exhibitors. We’re building on the success we’ve had in developing our show over the last four years and the brilliant relationships we have with the industry and our customers.”

Next year’s event will include a new dedicated Technology Theatre, a Technology Networking Zone and a larger Broadcast Sport Theatre and Zone.

MBI’s CEO Conor Dignam added: “We’ve been working hard to build the UK’s biggest and best event for the TV, film and video sector. This is testament to the great work Charlotte and the team have done on the show – and their approach of really working closely with the industry and exhibitors to develop the show.

"We will take the best elements of BVE and include them in our offering next year, particularly in the field of technology.”