Sanditon: on set at The Bottle Yard 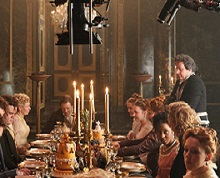 ITV and Masterpiece’s period drama Sanditon filmed at The Bottle Yard Studios and in various locations in Bristol and the West Country.

Georgina Lowe is the series producer.

Sanditon filmed for five months from February with the production base at The Bottle Yard, where Regency sets were built in 22,000 sq ft of indoor space. An outdoor 1820s street set was also constructed in the backlot.

Production designer Grant Montgomery explained in detail the requirements that needed to be met:

“Sanditon was predominantly shot in The Bottle Yard Studios. Five interior studio sets were built and of these two were reused throughout the series. 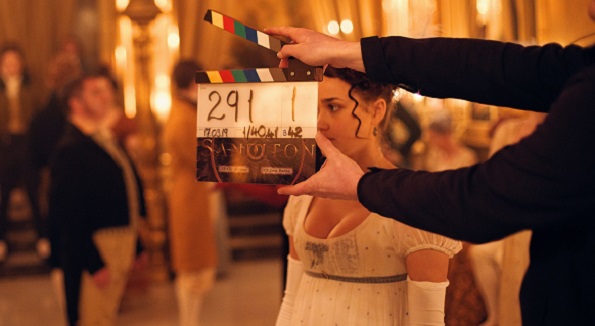 “The exterior street was used for two streets in the town; the building site of Waterloo Place and Trafalgar Street. It was built full-scale. Green screen was used only to extend into the beach areas. The set was also used for parts of London such as Cheapside, for which it was turned into a dock area. All in all it’s a 360° world that reflects a frontier western ‘Deadwood’ style meets ‘Georgian superpower’. This backlot set again took 10 weeks to build despite high winds, snow and buckets of rain!

“Sanditon House is based on the height of Chatsworth House’s main hallway and has a black marble finish inspired by the Bond film Thunderball. It has three fully working chandeliers that were lowered and lit on each day of filming, each taking up to 300 candles of different colours which were made especially for the show. One of the main features of this giant room is the life-size statue of a gold Neptune rising out of the waves on four horses, which was specially sculpted for the series.

“Attention to detail has been important… all of the elaborate curtain designs, wall coverings and murals were handmade specially for the series. For the London ball sequence shot, we converted Sanditon House and eight apple blossom trees were transplanted onto the set.” 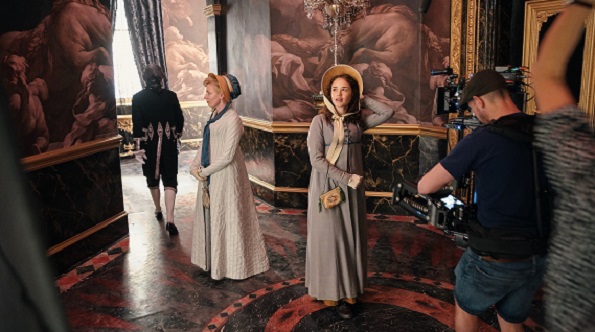 Alex Protherough, head of production, Red Planet Pictures said: "We were immediately drawn to Bristol and the South West. There is a wealth of locations in this area, perfect for period drama, and particularly the Georgian period where our story is set.

"The country houses, Bath and its elegant Regency architecture, even the Somerset coastline all offer a wide range of locations perfect for Sanditon. The Bottle Yard Studios are perfectly located to access these locations, and they have more to offer. Sanditon was always going to require an element of set building, as is often the case with continuing drama productions of this size. The construction and studio spaces at the Bottle Yard have made Bristol the obvious place to base."