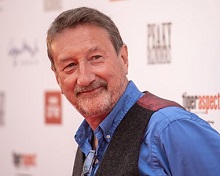 BBC One has commissioned a major new drama series from writer Steven Knight about the history of the SAS.

Based on Ben Macintyre’s best-selling book SAS: Rogue Heroes, the scripted adaptation will explore the story behind the elite Special Forces unit.

It will be produced by Kudos as a 6 x 60 and written with unique access to the secret SAS archives.

Knight said of the greenlight: “This will be a secret history telling the story of exceptional soldiers who decided battles and won wars only to then disappear back into the shadows. We will shine a light on remarkable true events informed by the people who shaped them.”

SAS: Rogue Heroes will be executive produced by Karen Wilson, Martin Haines and Emma Kingsman-Lloyd for Kudos and Tommy Bulfin for BBC One.

Knight is also working on Series 6 and 7 of Peaky Blinders as well as developing plans for a sizeable new Midlands-based film studio.