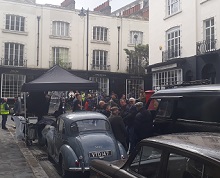 The show is from Warner Horizon Television for Epix and set up a production base at Warner Bros. Studio Leavesden last year, with filming running for six months from October.

Based on DC Comics characters, the 10 x 60 prequel series is set in London in the early 1960s, and stars Jack Bannon as Alfred Pennyworth, a former SAS solder who forms his own security company to take on local organised crime.

Locations in the London borough of Camden hosted filming for several scenes, often with a cast and crew of more than 100 across a total of 66 filming days.

Although there was a two-month lead-in, the shoot was challenging as the locations were largely in the busy West End, in the evenings as well as the daytimes.

FilmFixer film officer Juliet McConnell said: “The locations team also faced regular script changes which added to the challenge of sourcing and facilitating locations with only a couple of weeks’ notice.”

Grape Street in Covent Garden was dressed with neon signs, vintage cars, a wet down and smoke effects, while Senate House in Russell Square provided the setting for an army base.

Two Southwark venues doubled for East End pubs – The Kings Arms in Hatfields and The Mayflower in Rotherhithe Street.