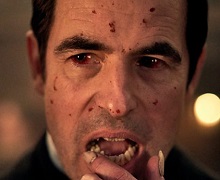 Filming wraps today (31 July) on Dracula, from Hartswood Films for BBC One and Netflix.

Since filming started in early March, Dracula’s production base has been at Bray Studios, former home to iconic British horror brand Hammer. It has also filmed at 13th century Orava Castle in Slovakia, doubling it for Transylvania.