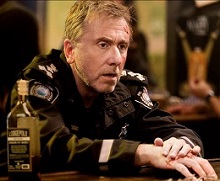 The third series of Tin Star has begun filming in the UK, relocating the story setting from Canada.

Shooting on the 6 x 60 is taking place in and around Liverpool where the new series is set as it sees the Worth family relocate to the UK to confront their menacing past.

Produced by Kudos and Gaumont UK for Sky Atlantic, the show is written and created by Rowan Joffe. Location filming for the first two series took place in the Calgary region of Alberta.

“Bringing the narrative of the show back to the UK gives us an exciting opportunity to surprise our audience and give the Worth family an even bigger and more unexpected challenge this season,” said Alison Jackson, president at Gaumont, when the new series was announced earlier this year.

Production Intelligence subscribers have had access to key information on Tin Star 3 since February this year, two months before active pre-production got underway.

Tin Star 3 is one of several projects that start filming around the UK this week, joining His Dark Materials 2, The Pale Horse and Grantchester 5.