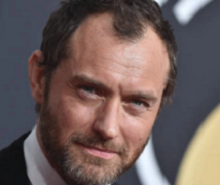 Filming begins in the UK this week on The Third Day starring Jude Law.

The six-part drama is the first to come from Sky’s new production house, Sky Studios and the latest in the original scripted content collaboration between Sky and HBO.

It is made in partnership with Brad Pitt’s LA-based production company, Plan B, and the immersive theatre company Punchdrunk International.

The series comes from creator and lead writer Dennis Kelly and stars Law as Sam. After being drawn to a mysterious island off the British coast, Sam finds himself overwhelmed by the rituals of the place and its secretive inhabitants, and confronted by a trauma from his past.

At the time of the announcement, Punchdrunk artistic director and co-creator Felix Barrett said: “At Punchdrunk International we have long harboured a desire to take our approach into television.

"We are thrilled to be working alongside Plan B Entertainment, Sky Studios and HBO to bring The Third Day to audiences on both sides of the Atlantic in 2020.”