Creation Stories filming in the UK 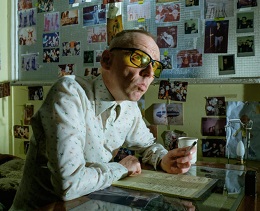 Danny Boyle is involved as an executive producer on feature film Creation Stories, which has started shooting in the UK.

The movie tells the story of Creation Records, a British label that Alan McGee founded and which ran between 1983 and 1999, releasing music from seminal British bands including Oasis.

Burning Wheel Productions is making the film with Nick Moran directing a script by Irvine Welsh. Ewen Bremner is playing McGee and co-stars include Rupert Everett and Suki Waterhouse.

Boyle and Irvine worked together on Trainspotting and its recent sequel, both of which also featured Bremner as supporting character Spud (pictured).

“Working as a team with Danny on this film is a dream,” said Moran. “He is a visionary, the most important British filmmaker since Tony Richardson, rightly regarded as one of the best directors in the world today and one of the most successful. He is also the kindest and most open of people and a cornucopia [of] practical knowledge and wisdom.

“The last time him and Irvine worked together they changed the world of cinema. Who wouldn’t be excited to be part of that team?”

The shoot for Creation Stories is scheduled to span ten weeks, with a base at Elstree Studios.