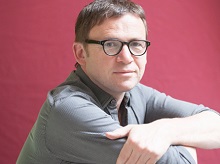 An adaptation of David Nicholls’ 2014 novel, Us, is in pre-production at Drama Republic for BBC One.

The book follows Douglas and Connie Petersen, a couple whose marriage is on the edge.

When they go on a tour of European cities, Douglas views it as a last-ditch attempt to win back his wife as well as a chance to repair the troubled relationship he has with his teenage son.

Nick Payne has written the 4 x 60 drama; author Nicholls (pictured) is among the team of executive producers.

Drama Republic is also in pre-production on LIFE, a story set in a large house in Manchester that comes from writer Mike Bartlett, who wrote two series of the hit drama Doctor Foster for the indie.

For details on Us and LIFE, including shoot dates and key HoDs, log into Production Intelligence. Non-subscribers can request a free online demo here.