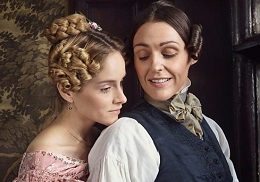 The BBC has commissioned a second series of its period drama Gentleman Jack.

Suranne Jones and Sophie Rundle star in the true story of Anne Lister, who in 1832 returned to her faded ancestral home in Halifax in a bid to transform its fortunes.

Lookout Point co-produces the series with HBO and the story is based on Lister’s extensive diaries.

The drama peaked with an audience of 5.6 million on its BBC One launch.

“A huge thank you to the BBC, HBO and Lookout Point for giving us our second series,” said Jones.

“It’s such amazing and positive news. I love working with the brilliant and talented Sophie Rundle and can’t wait to create some more Lister and [Ann] Walker moments with her too.”

Lookout Point has previously produced the BBC’s six-part adaptation of Les Miserables and a drama version of War and Peace.