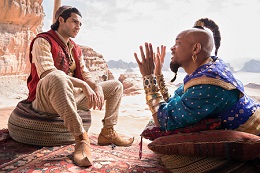 Immense sets were built at studios near London for Disney’s live-action version of musical story Aladdin, directed by Guy Ritchie.

Longcross Studios became home to fictional Arabian city Agrabah, built over the course of 15 weeks and specifically designed to provide exciting visuals for some of the film’s key musical numbers.

“There was a logic behind every single building placement, the direction each street turned and the way each house was oriented because of the intricately-designed musical numbers and action scenes,” says Dan Lin, one of the film’s producers.

The UK has become a hub for many of Disney’s live-action feature remakes. Maleficent and its sequel, Mary Poppins Returns and Dumbo were all shot in and around London. Upcoming movie Cruella, charting the adventures of the young Cruella de Vil, is scheduled to shoot in the region.

Select desert scenes for Aladdin were filmed in Jordan. Ritchie and his production team considered locations throughout the Middle East and North Africa, before focussing their shoot on Wadi Rum in Jordan, with the support of the country’s Royal Film Commission.

Producers of big-budget features and TV shows generally choose either Jordan or Morocco for projects with desert story settings, as both offer stable production conditions and extensive local logistical support.

Jordan has recently hosted scenes for Star Wars: The Rise of Skywalker – which was also based in the UK – and last year the country was used as a filming location for supernatural series Jinn, Netflix’s first Arabic-language drama.