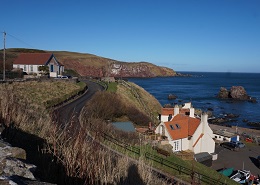 Marvel’s climactic superhero movie Avengers: Endgame filmed scenes in a Scottish coastal village to supplement its studio work in the US.

The movie begins where Infinity War left off, with the Avengers picking up the pieces and regrouping after villain Thanos has wiped out half of the universe’s population.

Production was largely based at Pinewood Atlanta Studios in Georgia, which has been a centre of operations for most of Marvel’s movies in the last few years.

But when Marvel spent seven weeks shooting in Edinburgh for a key action sequence for Infinity War, the production team also headed to additional locations for scenes in Endgame.

The village of St Abb's, 50 miles east of Edinburgh on the North Sea coast, became a key location, standing in for story setting New Asgard.

“Once they had decided to film in Edinburgh they locked down the extent of the search for this remote location so that it could be achieved without having to move the base out of the city,” says Rosie Ellison, head of Film Edinburgh, in comments to The Knowledge.

“St Abb's was chosen because of its charm and proximity to Edinburgh, which allowed them to move easily from one to the other.”

Marvel’s team spent several months prepping for a week-long shoot that was scheduled immediately after the night-set Edinburgh scenes.

“They moved from night to day filming and fortunately got some gorgeously bright, sunny days,” Ellison says of the St Abb's leg of the shoot.

“There was a location team dedicated to setting up St Abb's, working with the local community to make sure everyone was on board and getting them involved where possible. The production hired the community hall for costume and catering, and the harbour cafe served scones and crab to the crew throughout.”

The scale of the Avengers shoot meant that the team needed to close the main road going through Coldingham Village, a mile and a half away.

As previously reported by The Knowledge, Marvel spent around £10m during extensive prep and the eventual seven-week shoot in Edinburgh for Avengers: Infinity War, filming throughout the city’s Old Town and the Royal Mile.

While the Scottish scenes for Infinity War and Endgame were both shot mostly on location, Marvel did also use the Pelamis building in Port of Leith as a base. Screen Scotland has since announced plans to adapt the facility into a full production centre and is currently considering development proposals for the site from private companies.