The Spanish Princess filmed in Bristol 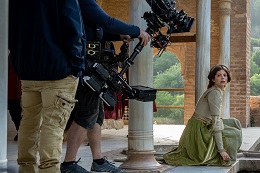 Period drama The Spanish Princess built large-scale sets at The Bottle Yard Studios in Bristol for a four-month shoot.

Set in the 16th century, the story follows Spanish princess Catherine of Aragon as she aspires to become the wife of Henry VIII.

The drama was produced for US network Starz by New Pictures (which is part of All3 Media) and Playground Entertainment.

Key set builds included a Tudor-era Westminster Palace that was put up in The Bottle Yard’s Export Warehouse and Tank House 1 production spaces.

“Everywhere we go we had to dress or create a world,” says Will Hughes-Jones, the drama’s production designer.

“I am very lucky to have a great team who will be looking into every detail – whether it be a type of seal that you put on a letter, to how it would be written [and] folded.”

Bristol is a production hub for the west of England and Wales. The Bottle Yard Studios recently hosted TV drama The Trial of Christine Keeler and was used as a base for Hellboy.