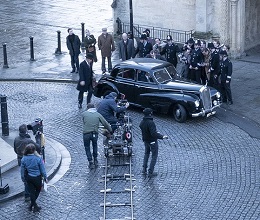 BBC drama The Trial of Christine Keeler has wrapped 17 weeks of filming during which Bristol stood in for multiple London settings.

The story charts the experiences of Christine Keeler, a 19-year-old aspiring model who in 1963 faced the intimidating might of the British political establishment when she was subject to an inquiry about her relationship with John Profumo, the secretary of state for war.

Ecosse Films has produced the six-part drama that used Bristol’s Bottle Yard Studios as a production base and also filmed on location throughout the city.

The rooms of a key character’s home and interiors of Marylebone Police Station were built as sets at the Bottle Yard.

Locations included Bristol Central Library that stood in for exterior shots of the police station, while the Wills Memorial Building doubled for the House of Commons. Ecosse also spent a week shooting at The Guildhall in Bath.

“It has been a delight to make The Trial of Christine Keeler in Bristol,” said Kate Triggs, an executive producer on the drama.

“The Bottle Yard has been a wonderful and supportive home and along with the film office, has helped to make Bristol a great place to film. The locations have also been inspiring for the whole team. And the icing on the cake has been access to the best and loveliest crew and HoDs I’ve ever worked with.”

Bristol is established as a production hub for the west of England. The Bottle Yard Studios are currently home to ITV’s period drama Sanditon and have recently hosted Poldark and Arctic-set drama Fortitude.