Hellboy and its Bristol filming locations 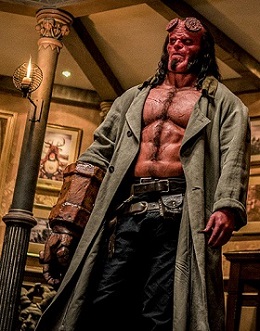 Comic book movie Hellboy filmed scenes in and around Bristol, with The Bottle Yard Studios used as a UK production base.

Directed by Neil Marshall and co-produced by Millennium Films, the movie follows David Harbour’s demon hero Hellboy as he confronts villain the Blood Queen, who is resurrected in the modern day from England’s Dark Ages.

Bristol Film Office assisted with the shoot that included 1960s-era council estate Waring House in Bristol itself and Wells Cathedral, 20 miles south of the city.

The UK locations complemented stage and back lot work at Nu Boyana Studios in Bulgaria.

“Hellboy was the fourth - and biggest - film that I’ve shot in my home city and Bristol never disappoints; it’s an exceptional place in which to make a movie,” said Benjamin Greenacre, the film’s UK unit production manager.

“The city and its surroundings has every sort of filming location a director could want. The Bottle Yard is a Grade A facility, perfect for our production base and Bristol Film Office is second to none.

“There’s a terrifically strong talent base here which is growing every year. Access to this talent, to the excellent locations and to the studios are huge incentives for productions to base themselves here.”

Bristol has developed into a production hub for films and TV shows looking to access locations in the west of England and in Wales.

The Bottle Yard itself is currently home to ITV’s period drama Sanditon and has recently hosted Poldark and Fortitude. A selection of service companies are based on-site, with Set Smith, Studio Cars, MRU Services, TR Scaffolding and Video Europe all involved with the Hellboy shoot.

More than 20 sets were constructed in Bulgaria. Nu Boyana has 13 stages, as well as underwater filming resources and standing sets that include modern New York and London streets, Roman buildings and an ancient village.

Millennium Media owns Nu Boyana with Nu Image and so regularly shoots its bigger-budget productions at the facility.

“There are some scenes viewers might expect would be shot on a set, but when Hellboy’s standing on a hill with the Blood Queen, you don’t imagine the landscape has been created,” says Paul Kirby, the film’s production designer.

Marshall’s Hellboy movie marks a reboot for the character after director Guillermo del Toro made two films in 2004 and 2008. Those productions were based in the Czech Republic and Hungary.