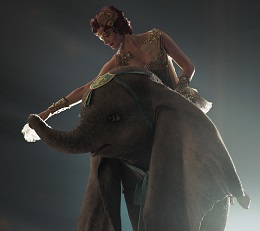 Hydraulic sets were designed to simulate the impact of digital elephants in Tim Burton’s live-action version of Dumbo.

The movie is a remake of Disney’s 1941 animated feature and was filmed entirely on studio sets at Pinewood Studios near London and in hangar spaces at Cardington Studios in central England.

Elephants appearing in the story were added in post-production, but the impact of their weight has to be physically mimicked during filming.

“In one of our first sets, we had a huge scene in which elephants were unloaded from their train carriage as they arrived to the circus,” says Hayley Williams, special effects supervisor on the film.

“When an elephant unloads down a wooden ramp, you would expect the ramp to move and bend because of the weight of the elephant. But since the elephants were produced in post, we had to build a ramp that flexed and then put a hydraulic rig underneath it to pull it down.

“We programmed a control system and worked with the animators, who could tell us if they wanted the elephant to step a bit faster or slower, or if we wanted the steps to be a bit further apart.”

For scenes where Mrs Jumbo, Dumbo’s mother, is loaded onto a truck, similar hydraulic systems were adapted into the chassis so that the vehicle bent and moved on set, in response to the weight of an animal that would be added to the film later.

Tim Burton has a long history of basing his film shoots in the UK, often using key studio facilities in the London area.

We are a CNC machining company using the latest CAD/CAM software and 5 axis machines to manufacture sets, props and models for the TV and… more Call: 01634 685319   |   Add to Shortlist