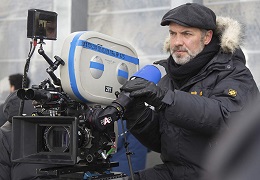 Sam Mendes has started filming war movie 1917 on location in England and Scotland.

The story follows two British soldiers over the course of a single day during the First World War.

Neal Street Productions, co-run by Mendes, is making the film for DreamWorks Pictures and Universal Pictures, with Universal and Amblin Partners distributing outside the UK.

Mendes made his first film, American Beauty, for DreamWorks back in the late 1990s, and 1917 marks his first collaboration with the production label since his period feature Revolutionary Road, which was released in the UK in 2009.

George McKay and Dean-Charles Chapman star in 1917 and will work with a seasoned support cast that includes Mark Strong, Andrew Scott, Daniel Mays and Benedict Cumberbatch.

Production will reportedly involve building trench sets and farm buildings on Salisbury Plain in the west of England, while the film also plans to shoot at Govan Graving Docks in Glasgow for a few days in mid-June.

Recent screen stories set in the trenches of the First World War have included Saul Dibb’s film adaptation of Journey’s End, which used standing trench sets near Ipswich and a specially built set at Pinewood Studios Wales in Cardiff.