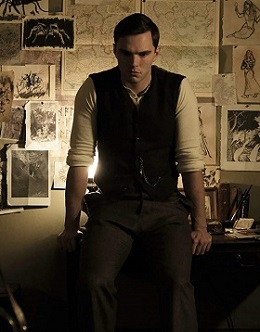 Dome Karukoski directed the movie, which stars Nicholas Hoult in the story of the formative years of writer JRR Tolkien and the experiences that shaped his iconic fantasy tomes, including The Lord of the Rings and The Silmarillion.

Tatton Studios was chosen partly because the facility and the broader Tatton Estate offered the space the Tolkien production team needed, within easy access of Liverpool and Manchester.

Trench sets built for scenes dramatising Tolkien’s experiences at the Somme were the largest ever hosted by Tatton Studios.

Charlie Greenstein is head of TV and film at Tatton Locations, which manages the studios and locations division for Tatton Estate.

“Set construction spanned several weeks and involved about a hundred people and then we had an additional 300 crew and a hundred extras for the actual shoot,” Greenstein tells The Knowledge.

“The Tolkien team also needed production office space and facilities for wardrobe and make-up. The other specific advantages of the Tatton Estate is that there are more than 6,000 acres – including a rookery, woodland, an orchard and various outbuildings – that are all under the same ownership.”

Tatton Studios has previously been best known for hosting children’s TV series The Worst Witch, which in its most recent incarnation is a co-production between CBBC, Netflix and German broadcaster ZDF.

The facility has also been used for scenes in the BBC’s hit period gangster series Peaky Blinders and the Sky road-racing drama Curfew.

In Manchester, producers have access to MediaCityUK, which is one of the UK’s top filming hubs, while Space Studios Manchester offers more than 85,000 sq ft of production space over six stages.

Amazon is currently developing a new drama version of Tolkien’s Lord of the Rings trilogy, more than 15 years after Peter Jackson’s film adaptation of The Return of the King won 11 Academy Awards and four BAFTAs. The streaming giant is reportedly considering Scotland as the main filming location for the new production.