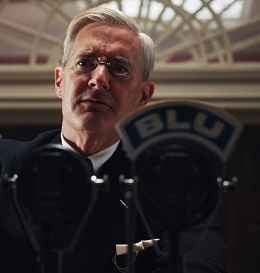 The eight-part, €40m series tells the true story of Norwegian Crown Princess Märtha, who was forced to leave Norway with her children when the country fell to Germany in the spring of 1940.

Märtha (played in the series by Sofia Helin) ended up living for a time in the White House as a guest of President Franklin D Roosevelt (played by Kyle MacLachlan, pictured).

Nevision is a co-producer on BBC Wales’ drama Keeping Faith and joins Norwegian production company Cinenord and Germany’s Beta Films on Atlantic Crossing. The drama is for Norwegian broadcaster NRK.

“A key aim for Nevision is to build our portfolio of high-quality drama series from across Europe – Atlantic Crossing is the perfect addition to our slate,” said James Cabourne, Nevision’s executive chairman, in a statement.

Atlantic Crossing is in production in Prague through to June. White House interiors and other key story settings are being shot in the city.

Prague is a European filming hub and TV shoots accounted for most of the international production spend for the Czech Republic in 2018 – around €125m, according to recent figures from the Czech Film Commission.

Scenes for Atlantic Crossing have also been shot in Norway, with Sweden, the UK and the US also originally listed on the production schedule.

The drama is being supported with a production grant of around €500,000 from the Nordisk Film and TV Fond.