Some of the shoot’s costume fittings and make-up tests were carried out in London before the production travelled to Prague for a four-day shoot.

RSA worked with Stillking Films in the Czech Republic and spent three of the shoot days on stages at Prague Studios.

Several weeks of set-building ahead of the shoot involved constructing a cave location where engineers are seen extracting an amber-like syrup from subterranean rocks. Separately, a spacecraft rig was mounted on a gimbal for shots depicting two pilots observing a fiery alien landscape. 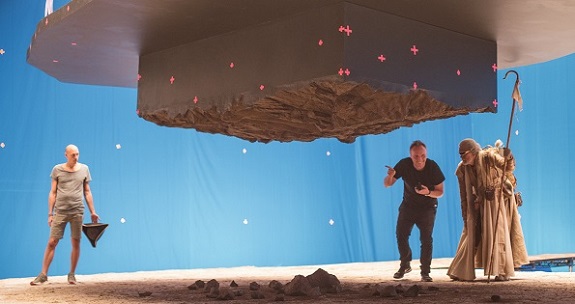 “We were building over a month on both stages prior to the shoot and the results are amazing," Ordnungova says. "The talent came from the UK and other parts were cast in Prague.”

The production team only ventured outside the studio setting for a part of the campaign set in a lush green forest where swirling leaves briefly take human form before morphing into a tree.

“We had been scouting in Prague but also in oak forests up to two hours away from Prague,” says Ordnungova. “As Prague also has quite a few forests, in the end we found a great location in Hvezda Game Reserve, which had oak trees.”

Hvezda is a protected park situated less than four miles from the centre of Prague.

Prague faces stiff regional competition from nearby Budapest, where indeed Ridley Scott has filmed extensively, as director of sci-fi hit The Martian, and as a producer on drama series The Terror and on Blade Runner 2049.