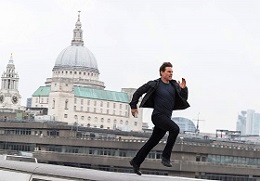 Netflix’s comic book movie adaptation The Old Guard is in prep for a UK shoot with stars Charlize Theron and KiKi Layne.

Based on comics by Greg Rucka and Leandro Fernandez, the story follows a team of mercenaries who are inexplicably and secretly immortal, but who find themselves under threat of exposure.

Skydance Media is producing The Old Guard for Netflix and has experience of shooting in the UK.

Key action sequences for Mission: Impossible – Fallout (pictured) were filmed in London and sci-fi horror film Annihilation used locations in south-east England as stand-ins for the southern US.

Production Intelligence subscribers can follow The Old Guard here for upcoming news on key crew hires and filming dates, as we get them.