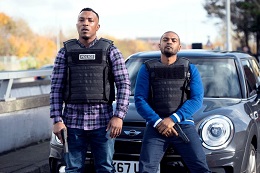 A new series of Sky crime drama Bulletproof is now in production in London with stars Ashley Walters and Noel Clarke.

Produced by Vertigo Films, Bulletproof was created and written by Walters and Clarke, along with filmmaker Nick Love.

The first episode of Bulletproof drew a cumulative average audience of 1.59 million on its broadcast in May last year, making it Sky’s biggest hit of the year, according to the broadcaster.

“With Bulletproof we wanted to give British cop drama a twist, bringing a combination of blockbuster action and warmth and humour to screens,” said Allan Niblo, executive producer with Vertigo Films.

“We’re so pleased with the response and can’t wait to work with Sky to bring back Pike and Bishop for another series.”

The London location shoot marks a change from the first series, which was filmed in Liverpool.