The Kid Who Would Be King in Cornwall 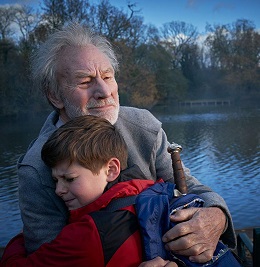 Writer/director Joe Cornish used locations in Cornwall for his modern-day Arthurian movie The Kid Who Would Be King.

Cornish’s film follows young boy Alex as he discovers the sword Excalibur and uses it to unite his friends and take on the enchantress Morgana.

Scenes were shot at Dozmary Pool in Cornwall, which has significance in the legend of King Arthur.

“Dozmary Pool is located on Bodmin Moor and it is one of the places which the Lady of the Lake is said to have inhabited,” says Cornish.

“It’s unusually high above sea level for there to be a body of water. It’s neither a pond, nor a lake, but it sits in the middle of the grass as if it’s been plonked there. You can really imagine a hand with a sword coming out of it.

“The first time I visited, there was a very heavy mist. You couldn’t see the edges of the lake, so you couldn’t tell how big it was, or how deep, and it had this ethereal atmosphere.”

The village of Minions on the eastern border of Bodmin became a key location, as did The Hurlers Stones, a collection of prehistoric stone circles near Minions that is managed by the Cornwall Heritage Trust.

Tintagel Castle, dating back to the 13th century, and Tintagel town on the Cornish coast, also became filming locations. The castle has a connection to the Arthurian legend as the place where the English king is said to have been conceived.

Elsewhere, the Ark Academy in Putney in south-west London stood in for the school attended by Alex and his friends.

While much of the movie was shot on location, Cornish and his team used Warner Bros Studios Leavesden as a production base over the course of the 17-week shoot. Morgana’s underworld home was built on the facility’s stages, as was a recreation of Dozmary Pool.

Producers shooting in Cornwall have the option of using The Bottle Yard Studios in nearby Bristol, which offers eight stages and has been used for TV dramas including Poldark and Fortitude.

BTP Enviro has been looking after productions for 20 years, from small TV programmes to big block buster movies. Services include: - Pest monitoring and… more Call: 01525 863951   |   Add to Shortlist

Fuel Cards by ADF is a bespoke service formulated by years of supplying the TV & Film Industry. Fuel Cards give clear visibility of spend,… more Call: 01656 507369   |   Add to Shortlist

We provide Location facilities specially designed for the TV & Film industry. Top facilities have a wide range of solutions for productions when trying to… more Call: 07413 669570   |   Add to Shortlist