Tom and Jerry movie to film in the UK 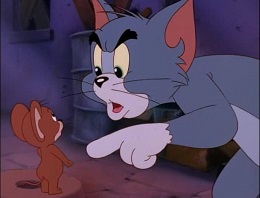 A movie based on the classic Tom and Jerry cartoon characters will be filmed in the UK later this year.

The film will reportedly set up Jerry as a mouse looking to scare away the young family that has moved into the New England house where he lives, and his conflict with a stray cat called Tom brought in to remove him.

Production will be based at a major studio facility near London and will be shot as a hybrid live-action/animated feature.

Tom and Jerry were originally created in 1940 by producers William Hanna and Joseph Barbera and the pair appeared in nearly 120 short cartoons for MGM up to 1958.

The characters have been reintroduced numerous times since and indeed the most modern incarnation, The Tom and Jerry Show, is still showing on US channel Boomerang.

The enduring characters appeared in a theatrically-released animated feature (pictured) in 1992.

Warner Bros and Hanna-Barbera Productions will be hoping to emulate the huge success Disney has found remaking its classic animated features with cutting-edge visual effects.

Beauty and the Beast, also filmed in the UK, delivered $1.2bn internationally for Disney in 2017 and a new version of The Jungle Book, composed almost entirely of digital sets, made $970m the previous year.

There are high hopes for a similar performance from the upcoming remake of The Lion King, which is blurring audience distinctions between what is animated and live-action.