Netflix’s Close shot in the UK and Morocco 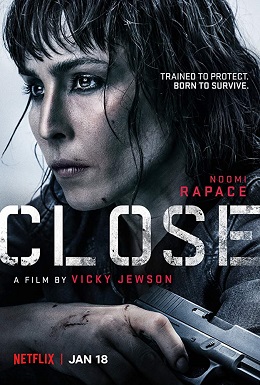 Vicky Jewson’s Netflix thriller movie Close filmed in the UK and Morocco over the course of a tight 29-day shoot.

Noomi Rapace stars as bodyguard Sam who goes on the run in Morocco with her heiress client Zoe after a botched kidnap attempt from her ‘kisbah’ – or ‘citadel’ – mountain base.

Jewson and her production team used a luxury property called Villa E in the Atlas Mountains outside Marrakech as Zoe’s fortified kasbah.

“Our location manager Rachid Gaidi suggested this crucial, key location and our producer Rupert Whitaker was instrumental in securing the location along with the helicopter which we landed on the helipad within the compound of the property,” says Arabella Gilbert, the film’s production manager, in comments to The Knowledge.

“This would not have been viable if Ali Bakkioui El Otmani of K Films had not worked so hard alongside the Moroccan military and civil aviation for the obtention of the helicopter permits.”

Several of the Moroccan story settings were in fact shot in the UK. These included the plush glass bungalow offices used by Zoe’s CEO stepmother in the story. This was set in Morocco but filmed in West Sussex with a wraparound green screen erected around the property so that a Moroccan vista could be added in post-production.

One of the biggest logistical challenges was having to transfer to Morocco just two days after the UK leg of the shoot had wrapped.

“As you can imagine that was extraordinarily tight, especially as we needed to ship a lot of kit and core crew to Morocco,” says Gilbert. “The boys at DHL Global Forwarding worked around the clock to efficiently move the ATA Carnet equipment and consumables.”

The production worked with Scallywag Travel, a firm based at Shepperton Studios that specialises in facilitating the shifting and often last-minute transport logistics demands of films and TV shows. Gilbert had worked with them before on productions including the BBC’s hit thriller miniseries The Night Manager.

“Morocco is a welcoming country that is comfortable with its filming infrastructure, especially in terms of local labour and understanding of the filming process.

“It is possible to hire some facilities, cast trailers and tech vehicles along with lighting and grip packages. However, we still had to ship in a lot of continuity props, costumes and specialist kit.

“As a majority of the schedule was shot in Morocco we elected to keep our core crew with us and the Morocco service company K Films – Khadija Alam and Ali Bakkioui El Otmani – supplied the remaining crew and ensured the barrage of potential pitfalls were considered and the logistical requests adhered to.”

Though Morocco was used as itself in Close, the country is popular as a stand-in for Middle Eastern story settings and particularly for modern war zone regions in Iraq and Afghanistan.