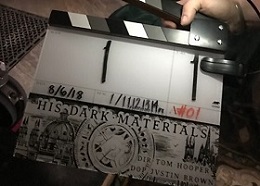 A second series of the BBC’s high-end TV adaptation of fantasy saga His Dark Materials will start filming in Wales this summer.

Based on the acclaimed trilogy of books by Philip Pullman, the story follows young girl Lyra and her adventures between multiple parallel universes as she battles sinister forces.

Commissioned in 2015, the drama is produced by Bad Wolf with New Line Cinema and HBO.

As with the first season, production on Season 2 is based at Wolf Studios Wales in Cardiff, a facility that offers six stages and has also hosted the first season of Bad Wolf’s TV drama A Discovery of Witches for Sky.

New Line originally made the first part of His Dark Materials into feature film The Golden Compass in 2007, with Dakota Blue Richards as Lyra and Daniel Craig as Lord Asriel. However, the film did not find a large audience and adaptations of the next two books in the trilogy never materialised.

Bad Wolf is working on several other TV dramas, including two additional seasons of A Discovery of Witches. The series, based on novels by Deborah Harkness, has been a hit for Sky and had sold to more than 80 territories within six weeks of its initial broadcast.