Our Girl to return to South Africa 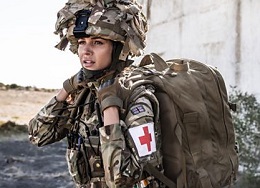 The BBC will film South Africa as Afghanistan for a new series of military drama Our Girl.

Produced by BBC Studios, the show follows Michelle Keegan as British soldier Georgie Lane on a deployment to Afghanistan.

“I’m absolutely delighted that Michelle Keegan will be reprising her role as Georgie Lane for another tour of Our Girl,” said Tony Grounds, the show’s writer and creator.

“2 Section are deployed to Afghanistan as part of Nato’s Resolute Support Mission to develop the military capability of the Afghanistan government’s armed forces.”

The BBC frequently films on location in South Africa, recently using the country as a stand-in for ancient Troy in Troy: Fall of a City and for 1960s Yemen in The Last Post.

Morocco is also a common African double for screen stories set in Afghanistan or Iraq and is regularly used by American productions, while New Mexico is a frequent choice for US shoots that do not want to stray too far from Los Angeles.