Strike Back - behind the scenes in Malaysia 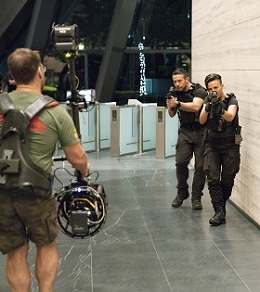 A new series of Left Bank Pictures’ action drama Strike Back filmed on location in Malaysia with a production base at Pinewood Iskandar Malaysia Studios.

Made for Cinemax and Sky One, the new story shifts the franchise to South-East Asia as elite military unit Section 20 searches for a missing nuclear payload from a bomber when the aircraft crashes in the South China Sea.

“Malaysia was chosen because the show needed to see new worlds and locations after many seasons shot in South Africa and Hungary,” says Richard Burrell, an executive producer on the show, in comments to The Knowledge.

“With new advantageous tax breaks in Malaysia and a writer and showrunner (Jack Lothian) based in Bangkok, it was the perfect time to head to a new South-East-Asian country.”

A couple of months before formal pre-production, the show’s core team carried out location recces that helped inform the writing process. While production took place entirely in Malaysia, the country didn’t always feature as itself in the context of the story.

“We filmed two episodes in Kuala Lumpur, two episodes in Penang and then six episodes in and around Johor Bahru,” says Burrell. “Whilst the first two episodes are set in Malaysia the other locations served for India, Myanmar, the Philippines, Indonesia, Russia and Azerbaijan.

“We chose the various regions for the wealth of different locations and worlds that they could give us - urban Blade Runner-like modern cities, beautiful beaches, jungle rivers and shanty towns.”

The team used Pinewood Iskandar Malaysia Studios as a base when they shot in regional capital Johor Bahru, with only a 15-minute drive between them.

Pinewood offers five stages, a 14-acre back lot and various standing exterior sets among its facilities and has previously hosted shows including the Netflix drama Marco Polo.

“At the studios we used their jungle back lot, underwater tank and studio space for set builds - amazing facilities,” says Burrell.

The cast underwent constant firearms and tactical training, beginning during pre-production and continuing throughout the six-month shoot. 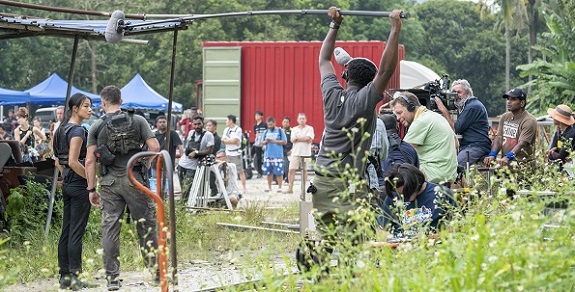 Former soldier Paul Biddiss worked with the actors to develop combat styles specific to each of their character backgrounds and also advised on mission scenarios during the writing process.

“Strike Back is a very fast-paced show which constantly evolves over the six-month shoot,” says Biddiss in comments to The Knowledge. “It’s non-stop gunfights and stunts so prior training is paramount, but every day was a training day as new challenges in the script popped up."

“Three of the main cast had already completed a season so had an understanding, but there was room for improvement in their marksmanship principles and I introduced them to new drills," says Biddiss. "All the cast were very focused on wanting to get it spot-on.” 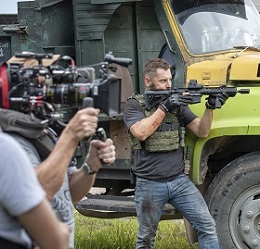 “There were challenges when arranging training but nothing new when filming in locations with tight gun control laws,” says Biddiss.

“There were Malaysian elections which sometimes added to the challenges of shooting in another country - but we improvise to get the job done.”

While the production team enjoyed the range of locations on offer, the heat and humidity was an adjustment for the cast and stunt team.

The geography of Malaysia’s production industry also required considerable pre-planning because while the Strike Back shoot was largely based in Johor Bahru, the country’s industry is centred nearly 190 miles away in national capital Kuala Lumpur.

“This means that there are no last-minute requests for kit or people – you have to think ahead as everything has to be brought down from Kuala Lumpur,” says Burrell.

Burrell adds that for Strike Back some crew with more specialist skill sets had to be flown in from Australia and Thailand but otherwise he is quick to praise Malaysia’s personnel and infrastructure.

“Malaysia is a country still building up its filming infrastructure of kit, skills and support but I would have no hesitation in returning there for future projects."