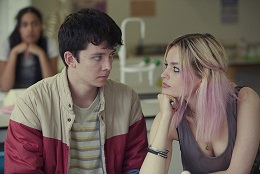 The streaming giant made 40 productions in the UK in 2018 and plans to increase this figure.

Teen comedy drama Sex Education - starring Asa Butterfield and Emma Mackey (pictured) - was filmed in Wales and Netflix organised a Penarth-based training programme with the aim of graduating trainees to full-time roles, should the show get a second series.

“We recognise the vast pool of talent here so we would love to be in business with those storytellers,” said Alex Sapot, Netflix’s UK commissioner, at an industry screening of Sex Education.

“Part of the ethos at Netflix is finding new talent and the only way to do that is to give people experience.”

Several of the key creatives on Sex Education are just starting their careers. The show is the first greenlit production for writer/creator Laurie Nunn and it marks the first full-length TV series for director Kate Herron.

The company reportedly plans to make London its main production hub through which all of its European operations will be co-ordinated. The UK is already one of the world’s top filming locations.