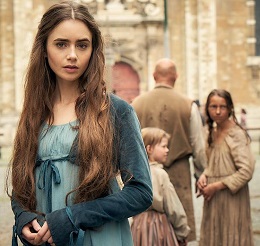 Made by London-based Lookout Point, the BBC’s version of the story was directed by Tom Shankland using a script by Andrew Davies and does not involve any musical elements.

France has become a more film-friendly location for international producers since boosting its filming incentive support but the visuals of modern Paris can be a challenge for films and TV shows with period settings.

The BBC has experience doubling other parts of Europe for period Paris, with adventure series The Musketeers having built the French capital near Prague in the Czech Republic.

For Les Misérables, early 19th century Paris was recreated using a patchwork of visually-appropriate locations in and around historic parts of Brussels, in the nearby city of Ghent and in the French town of Sedan near the Belgian border.

“No one’s heard of Sedan, but it’s an unbelievably beautiful town with a massive old fort in the middle of it,” said producer Chris Carey, in comments to media outlet iNews.

“The people of Sedan were amazing. They let us caper about with hundreds of extras, shooting guns and firing cannons at all hours of the day and night.”

Location work in the Brussels region spanned nearly 30 of the overall 96-day filming schedule and involved €200,000 of investment from the Screen Brussels fund. The team worked locally with production company Czar Brussels.

The producers made use of warehouse facilities in the city to store period props, costumes and production design materials.

Screen Brussels is a prolific investor in international co-productions and invites submissions for funding consideration three times a year. Features and TV series must commit to a minimum local spend of €250,000 to qualify for the support and funding is capped at €500,000 per production.

The last high-profile adaptation of Les Misérables was a big-budget 2012 film directed by Tom Hooper that featured singing unusually shot live with a cast led by Russell Crowe and Hugh Jackman. Hooper largely doubled UK locations for the story’s French settings and used Pinewood Studios as a base. The film went on to win multiple awards including three Oscars and four BAFTAs.