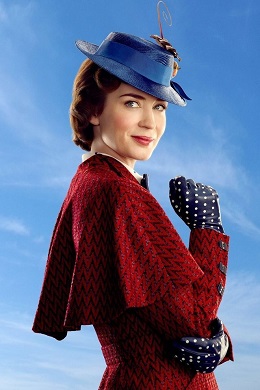 Directed by Rob Marshall, the film is set in 1930s London, two decades after the events of the 1964 original movie, and tells a new story of Emily Blunt's Mary Poppins revisiting Cherry Tree Lane to help the now grown-up siblings Michael and Jane Banks.

The various rooms of the Banks' home were among the interiors put up on the 12,000 sq ft D Stage.

An abandoned park set used as the setting for the film’s biggest musical number Trip A Little Light Fantastic – lasting eight minutes of screen-time – needed a full 26-week build period and involved constructing a five-storey set that included a bridge and a greenhouse.

Exteriors for this sequence were shot at Middle Temple in central London, utilising the location’s cobblestones, urban archways and tunnels.

“We shot all over central London at most of [the city’s] most iconic locations,” says Ali James, the film’s supervising location manager, in comments to The Knowledge.

“From the Tower of London to Buckingham Palace, the streets of Westminster [and] the streets of Shoreditch, it is a who’s who of pre-war London locations.

“[We tried to avoid] too many large builds [and] tried to choose streets and locations that were the most untouched by modernity so all we had to do was to hide modern signs and street dressing.

“We did remove a lot of street furniture, from traffic lights to bollards and what we did not learn about London gaslights is not worth knowing!”

Mary Poppins Returns is just one high-profile entry in Disney’s catalogue of classic remakes to be based in the UK. Among the recent visitors, Guy Ritchie used Longcross Studios as a base for a live-action remake of Aladdin and Tim Burton’s upcoming Dumbo filmed at Pinewood Studios.

Disney’s subsidiary Lucasfilm has used Pinewood Studios as a long-term base for the new Star Wars films, while Marvel – also owned by Disney – most recently shot Spider-Man: Far From Home at Warner Bros. Studios Leavesden.