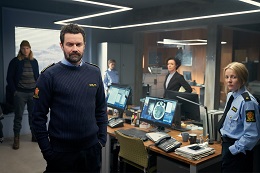 Set on Svalbard, midway between Norway and the North Pole, the psychological thriller was produced by Fifty Fathoms. The production was based at The Bottle Yard for six months and shot on three separate stages.

“Filming in Bristol at The Bottle Yard Studios was a genuinely happy experience,” says Patrick Spence, an executive producer on the series.

“The cast and crew immediately felt at home, the facilities and staff were top-rate, and the shoot ran smoothly due in no small part to their help.”

The Bottle Yard Studios offers a selection of production spaces and has hosted period dramas including Poldark, The White Princess and Wolf Hall, as well as rebooted entertainment format The Crystal Maze.

“Svalbard is a very popular location for wildlife and becoming more popular for dramas and feature films,” says Jason Roberts, of local service company Polar-X, the local company that worked on Fortitude, in comments to The Knowledge.

“It is the only easily accessible location in the high-Arctic and has super-modern infrastructure and services, making it the perfect choice for a production with a large crew.”

Svalbard is administered by a Norwegian-appointed government. As a country, Norway has seen its international production profile rise in recent years since launching a 25% filming incentive.