Screen Scotland is inviting proposals from private companies to develop a new film studio at an adapted facility in Edinburgh.

The former Pelamis building in Port of Leith (pictured below) is an 8.6-acre site that has the potential for five sound stages across 160,000 sq ft of floor space, with an additional 27,000 sq ft available for workshop facilities and offices. 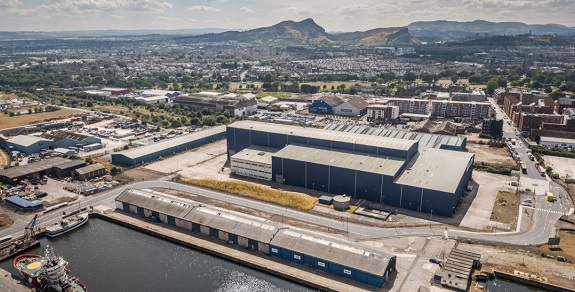 A private developer is being sought to lease the site, turn it into a viable studio facility – with financial support from Screen Scotland – and to be the eventual operator.

“Its scale, accessibility, proximity to crew and central Edinburgh and its ability to be rapidly adapted, make it a highly attractive proposition and one that could swiftly provide a home in Scotland for large-scale productions.

“Screen Scotland is firmly committed to supporting the growth of the screen sector to be a global screen leader. The site presents a fantastic opportunity to increase Scotland’s screen infrastructure and capitalise on the unprecedented production boom, which will have a hugely positive impact on our screen sector and the wider economy.”

The Scottish government has been under pressure for years to expand the country’s studio infrastructure and in this sense the Leith announcement represents a positive step forward for the Scottish industry.

However, the decision may also cause controversy as it involves adapting an existing site rather than representing a commitment to a purpose-built facility.

Scotland’s other recent high-profile feature shoots have included historical features Outlaw King, shot almost entirely on location in Scotland, and Mary Queen of Scots, which used Pinewood Studios near London as a production base for a story partly set in England.

Over the summer, Screen Scotland launched a new £3m Broadcast Content Fund, which will offer sums of between £10,000 and £50,000 to Scottish production companies to assist with project development and filming.