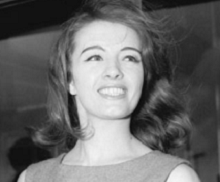 Filming is underway on a new BBC One drama exploring the infamous political and sexual scandal that came to be known as the Profumo Affair.

The six-part drama is based at Bristol’s Bottle Yard Studios and comes from writer Amanda Coe and Ecosse Films. It stars Sophie Cookson as Keeler, with James Norton, Emilia Fox, Ellie Bamber and Ben Miles among the supporting cast.

Kate Triggs, executive producer for Ecosse Films, said at the time of the commission news: "In 1963 Britain changed irrevocably. Old certainties about class, race and sex exploded. And 19-year-old Christine Keeler was the flame that lit the touchpaper.

“This is a story about change: a story for our times. I am thrilled to be working with Amanda Coe again and to see her brilliance shine through this original commission."

Ecosse’s Douglas Rae executive produces alongside Coe and Lucy Richer for the BBC.

Formerly a winery and bottling plant, The Bottle Yard Studios opened in 2010 and offers eight stages ranging from 8,000 to 22,000 sq ft.