Filming wraps on Catherine the Great 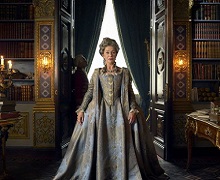 Filming wraps today on Sky and HBO’s original drama Catherine the Great, which has been filming in Latvia, Lithuania and Russia.

Nigel Williams wrote the series, which is directed by Philip Martin. The production comes from Origin Pictures and New Pictures, and is the third commission from Sky and HBO’s high-end drama co-production partnership.

It follows Chernobyl, which recently wrapped a lengthy shoot, and Gangs of London, currently shooting in the capital.

Catherine the Great is one of several UK dramas wrapping around now; others include the fifth series of Black Mirror, Acorn’s new crime drama Queens of Mystery, the second series of Trust Me and a new BBC One comedy starring Martin Clunes called Warren.