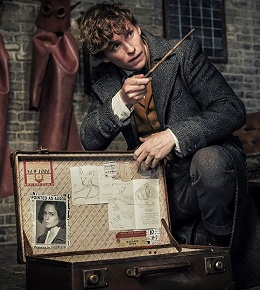 Scripted by JK Rowling, the film is the second instalment in a planned five-part series of prequels to the Harry Potter saga.

The Fantastic Beasts sequel is largely set in 1920s Paris. However, as with the first Fantastic Beasts – set in period New York but shot at Leavesden – the production team chose to again build elaborate sets on Leavesden’s back lot.

Crew travelled to Paris only for research and to shoot plate shots to be added later as background visual effects.

“We went to Paris several times and took pictures of things we liked – streets, apartment blocks, shops – the most interesting things we could find,” says Stuart Craig, the film’s production designer.

“We also had a professional researcher who put together an extensive pictorial archive, so we could make our Paris look as it did in 1927, in particular adding black sooty deposit on the buildings – the effect of air pollution resulting from the coal fires of the day.

“We don’t try to build fantasy sets – we try to let the fantasy somehow be born out of seemingly real environments.”

Leavesden’s sound stages hosted a multitude of physical sets for many of the story’s key settings, including Scamander’s London home and animal sanctuary, France’s equivalent of England’s Ministry of Magic and part of an amphitheatre where Grindelwald rallies supporters to his cause.

Only a fraction of this final amphitheatre setting was in fact physically built – it was largely created digitally – but the set could still hold more than 600 extras.

The movie features flashbacks to Scamander’s time at the iconic Hogwarts School of Witchcraft & Wizardry, though settings such as the Great Hall – which did not survive the Harry Potter saga intact – were created digitally for their brief appearances here.

One of the movie’s few location filming elements saw a return to Lacock Abbey in Wiltshire for scenes set in the exterior grounds of Hogwarts.

Warner Bros. bought Leavesden Studios in 2010 after using the facility as a production base for all the Harry Potter films. As well as becoming a centre of operations for the Fantastic Beasts franchise, the site has also hosted several of Warner Bros’ major superhero movies including Justice League and two Wonder Woman films.