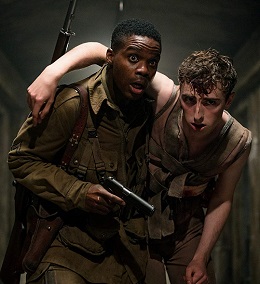 War horror movie Overlord filmed the UK as France for a fictional story of US paratroopers getting more than they bargain for the night before D-Day.

Produced by JJ Abrams and directed by Julius Avery and, the film follows a group of soldiers who find themselves coming up against sinister Nazi experiments beneath a remote farmhouse in Occupied France.

Filming was based at Warner Bros Studios Leavesden near London where interiors were built of the story’s French village, along with a network of tunnels and laboratories where much of the movie's story takes place.

The production team also filmed on location, including at Hatfield House Estate north of London.

Other key locations included a tunnel entrance to the subterranean story settings, which was filmed on location in Sussex.

“We had a lot of prep as the whole film takes place over one night so there was a lot of night shooting and therefore considerable lighting requirements,” says Harriet Lawrence, the film’s location manager, in comments to The Knowledge. “The art department had about five or six weeks’ prep at the tunnel location.

“We were also filming scenes throughout the night that involved gunfire, shoot-outs and explosions so we made sure the local community were fully aware of what we were doing.

“The tunnel exterior needed to be made accessible, the track cleared of weeds and then some dead wood removed. The art department then had significant prep time to turn it from an overgrown, inaccessible, disused railway tunnel to a secret entrance to a mysterious underwork.”

Getting to the tunnel entrance location proved one of the bigger challenges as travelling by car was only possible via a very roundabout drive. A scaffold staircase the team initially built down a steep embankment had to be taken down when it became clear it would be in shot during filming.

In the end a more subtle staircase was cut into the embankment itself and joined with other specially-created pathways and a temporary bridge.

“It looks very impressive, and very different on-screen from when we first looked at it months before the shoot,” Lawrence tells The Knowledge.

“The access logistics were so complicated, I am fairly sure the UPM said confidently on the first recce, ‘We’ll never shoot here’. At which point, we, in locations, knew we would indeed film there – no matter what!”