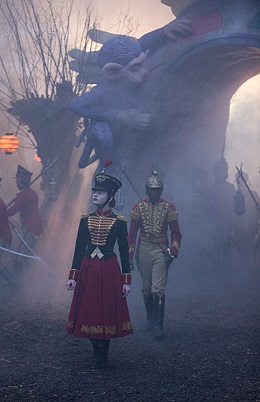 The Nutcracker and the Four Realms used Pinewood Studios as a production base and filmed in and around London for Disney.

Co-director credits are taken by Lasse Hallstrom and Joe Johnston. The film itself is inspired by ETA Hoffmann’s 1816 story The Nutcracker and the Mouse King, and Alexandre Dumas’ retelling of the tale in Tchaikovsky’s 1892 ballet The Nutcracker.

Set in London in 1879, the movie follows young Clara and her adventures in four mystical realms as she searches for the key to a mysterious box left to her by her late mother.

‘Real-world’ story settings book-end the film and were shot partly on location.

“The project involved the construction of elaborate and fantastical sets to define distinct imaginary lands and the locations were therefore led and defined by what they had to match – the real-world settings for the introduction to the imagined,” says Alex Gladstone, supervising location manager on the film, in comments to The Knowledge.

Interiors at Harefield House near Pinewood became Clara’s family home. Elsewhere, Minley Manor in Surrey, a lecture hall in Dulwich College and Syon House Great Observatory in west London were the main locations that were ultimately combined with Pinewood sets to realise interior and exterior locations of a single stately residence.

Kensington Gore, a thoroughfare on the east side of London landmark the Royal Albert Hall, also became a key location for a few hours of shooting.

“Snow was the common denominator as regards the changes made to each location,” says Gladstone. “Dulwich, Kensington Gore, Syon, Harefield House and Minley required substantial set dressing and some construction in order to both link the built sets with the locations, and to re-imagine the late-Victorian period in which this version of the story is set.

“This led to the biggest challenges that we faced in setting up the locations – beyond the relatively standard logistical elements such as processing background artists and horses and carriages into artificially snowy sets, we also had to remove and replace a vast chandelier, in order to accommodate an equally vast Christmas tree, and paint and repaint the listed ex-Rothschild Mansion at Halton from white to plum and back again.

“At Kensington Gore we had a limited time-frame within which we could control both the Royal Albert Hall and the street outside it.”

Just one of the story’s four realms – known simply as the Fourth Realm – was created for the shoot as a physical set, along with a palace setting that sits at the centre of the movie’s story world. The other fantastical settings were generated digitally.

Three separate forest sets were built at Pinewood to realise the Fourth Realm. Each was designed to cater for the needs of specific scenes such as a clear path for horses to pass through, and a space for a full-size carousel.

Pinewood remains one of the top studios in the UK with international appeal and has become the long-term home of the Star Wars franchise.